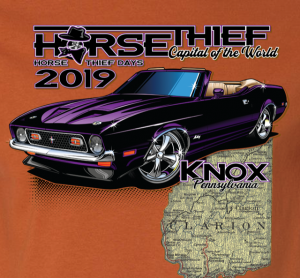 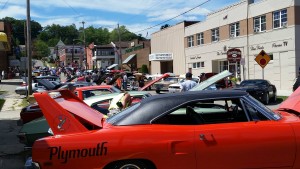 Knox Borough is located in Clarion County and known as the “Horsethief Capital of the World”. The following article explains how Knox became the “Horsethief Capital of the World. The article was written by Jawnie The page was designed by Jess, Class of 2004 Editors Note:  The following information came from the articles printed in the Clarion Democrat and The Clarion Republican Gazette, dated: October 15, 1885 and November 12, 1885.

Horsethief Days is a festival that happens in the Borough of Knox, in Western Pennsylvania.  It happens the week before school goes back into session.  (last week in August) During Horsethief Days there are so many activities you can do. For instance, there are all sorts of dances (country line, adult, and teen), kiddie parade, sidewalk sales, Nickelodeon night, bike races, tractor races and eventually the Horsethief Parade on the last day of the festival. The activities are fun and very interesting.

Horsethief Days started back when Sebastian (Boss) Buck started stealing horses and changing them, so when he sold them that the real owners wouldn’t discover that the horses that Boss was selling were theirs.  He would sell them down South and then there were other people who were selling them in the North. Boss made a lot of money doing this, plus he really enjoyed it. He didn’t have hardly any education but he was the planner of all the schemes and had the intelligence, power, and daring, to be the leader of the horse thieves.

Stealing horses and making fake money was a vacation for him. He loved doing what he did.  He didn’t care about what other people said because he would mostly do all his work at night, so no one would know about what he did. He even had other members of his clan down south steal horses and bring them here.  The reason it was here was because Clarion County was the head quarters or the “Horsethief Capital”.  Boss never worked alone.  He never stole a horse by himself;  he had other people with him. When the police found out about this, they went and got a warrant for his arrest.  He went into hiding for a while and after they gave up on him, he just came out and started stealing horses and making fake money. He was the top criminal of United States of America.  Finally he got caught and was arrested.  He straightened up in jail and when he got out, he never stole horses again.  That is how Horsethief Days started, because it is in remembrance of Sebastian (Boss) Buck and all the other horse thieves.  I really enjoy Horsethief Days.

Some of the attractions where you can see when this occurred are Brady’s Bend, Clarion Area Historical Society Museum, Clarion Historical and Beaver Creek Nature Area.  There are also many hotels you can stay at if you are just visiting the area.  I really encourage you to go to Horsethief Days.  It is a lot of fun, and I don’t want you to miss out.  Knox, Pennsylvania is the Horsethief Capital of the World.

HORSETHIEF KICKOFF MEETING JANUARY 20 AT 630P AT THE BOROUGH!

HERE ARE THE LINKS TO EVENTS WE HAVE SO FAR

HORSETHIEF DAYS THIS YEAR IS AUGUST 13 TO AUGUST 20!